The NFL’s Los Angeles situation is zooming forward with the future of three franchises uncertain. Right now we are four days away from the next NFL owners meeting to discuss the unfolding events. Let’s take a look at where we are right now.

I would start in Oakland but, let’s be honest, nothing is really happening. No really. While there is a vague plan being discussed, it proposes a commercial, residential, and retail complex that would create new homes for both the As and the Raiders. The real kicker? The county and city own the land together meaning double the political hoops to jump through. The Colesium situation is a mess and anything the Raiders try to do will be weighed down by the Athletics. Unless the Raiders can have more success in Carson, Mark Davis may be seeing his ownership days come to an end.

San Diego is at least a little more interesting. After the Chargers announced their plan in Carson with the Raiders the city of San Diego finally announced their own stadium plan. The city’s plan calls for a new stadium near the Chargers’ current stadium. Carson seems to be moving along steadily. On the other hand, the San Diego project is being slowed by an environmental study. Study results are expected to be published August 10, a day before the next owners meeting. Critics will be quick to dismiss the study’s findings because it was expedited. The study that could have taken as much as a year was rushed to completion in merely a few weeks. San Diego is also dealing with their own county and city issues; their case centers on the need (or no need) of a public vote for the county to spend public funds on the stadium progress.

Meanwhile St. Louis’ stadium taskforce has been making unprecedented progress. A huge victory came early this week when a city judge sided with the stadium supporters in a {petty} lawsuit regarding a potential vote. [Votes are being avoided in these situations across the country because of time sensitivity.] One more minor lawsuit is still pending in Missouri, but many believe the judge in that case will follow the precedent set by his city counterpart. The taskforce has acquired nearly all of the land on the site and is working on tweaking the design. Groundbreaking could take place as soon as early 2016. 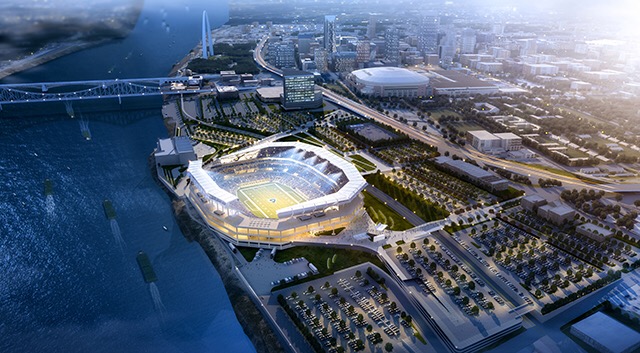 This is all fine and well, Ethan, but what does this mean?

As a football fan in St. Louis, you should be encouraged by the steady progress in Carson. The Chargers and Raiders moving there would make it awfully difficult for the NFL to allow Kroenke move a third team into the region, especially when St. Louis’ plan is moving along so well with NFL support. {I still find it comical so many people think LA is going to be a smashing success when they have such a poor pro football history.} Fans must also remember that there’s no reason to believe the other NFL owners would want Kroenke, one of the richest owners who is already violating league rules regarding ownership of franchises in other cities, to move to the biggest market. It’s also important to note the support the NFL has given Peacock and Blitz thus far.

Now I need to touch on Kroenke himself and his not-so-sly tactics to silence the #STLNFL movement. NFL Network featured Rams camp on Thursday just in time for some of the grass parking lots outside of Rams Park to be mysteriously shut down. This hurt attendance on the day the national spotlight was on St. Louis. The Rams also announced fans are no longer allowed to bring signs into Rams Park after reporters noted some pro St. Louis signs earlier in camp. Kroenke can continue to carry out these petty acts in an attempt to silence the fan base, but personally these actions are just firing me up even more. I want to fight back against this greedy man more than ever.

As weird as it may seem, the best way to fight back against Kroenke this year is to SUPPORT THE TEAM. Coming to the practices and the games in your ST. LOUIS Rams attire shows the NFL that St. Louis cares. Besides, the vastly improved team has even been projected to win ten games and a playoff game. The taskforce has done the hard work creating a more than viable stadium plan; it is time for the fans to do their part by coming out and supporting the NFL in St. Louis. If the NFL chooses to ignore all of the relocation rules in STL’s favor and the taskforce’s progress THEN you can never spend another dime on the NFL.

Some are beginning to wonder what Kroenke’s next move would be if the Carson and St. Louis projects both succeed. I’m among those who think he may be forced out if the owners do not vote in his favor and he refuses to stay in St. Louis. This would be an opportunity for the NFL to enforce their rules regarding owning professional franchises in other cities. I doubt he would willingly sell as the NFL is so profitable. Time will tell, but your support today could very well result in Kroenke’s departure from St. Louis.

Personally I’ll be heading to the Rams scrimmage today at Lindenwood wearing my ST. LOUIS Rams apparel. I hope to see full stands of people like me there. As this situation unfolds I want to remind you to always use logic. The vast majority of football fans are grossly uniformed about the topic and spout off without any sense of how stupid they sound.