St. Louis Cardinals General Manager John Mozeliak made it clear early this offseason that his team had some ‘payroll muscle to flex’.

Unfortunately, Mo’s vision for the team’s near and distant future were dramatically changed after the tragic death of Oscar Taveras, the organization’s top prospect. This opened a glaring hole in right field where the team was already desperate for offensive production.

Mozeliak had to make a bold move in response, sending talented, young hurlers Tyrell Jenkins and Shelby Miller to Atlanta for slugging, gold-glover Jason Heyward and set-up pitcher Jordan Walden. Mo is well known for completing big deals before the market sees prices rise. Later Mozeliak signed Mark Reynolds to a small contract as an insurance policy for some right-handed power behind Matt Adams at first base. Things went quiet for a while in St. Louis as the Winter Meetings saw a flurry of activity around the league.

A few days ago, Ken Rosenthal and John Paul Morosi published this article for Fox Sports showing evidence of the Cardinals sniffing around some of Major League Baseball’s top pitchers.

Many wonder if this is a sign that Mozeliak is concerned about the health of Adam Wainwright, who had a minor procedure after the season ended, and Michael Wacha, who has been dealing with a complicated stress reaction which could lead to a compound fracture. Right now the Cardinals projected rotation is: Wainwright, Wacha, Lackey, Lynn, Martinez. Lynn and Lackey have been dependable workhorses. Lackey is a little older; however, he’s only pitching for $500,000 this season. The real question mark is Martinez, who is very effective in the bullpen and hasn’t proved himself as a starter. If an injury were to occur, I would guess Marco Gonzales and Tyler Lyons (both left-handed) would be next in line. The Cardinals also have some flamethrowers in the bullpen (Rosenthal & Siegrist to name two) who want to find their way into the rotation eventually. All of this looks great on paper, but it appears as though Mozeliak wants a more experienced talent in the rotation. Here’s a look at the four guys the Cardinals are being tied to the most as well as the pros and cons to each guy.

James Shields — ‘Big Game’ James Shields didn’t quite live up to his nickname for the Royals in the World Series.

Shields, a right handed 33 year old standing in at 6’3″, is currently a free agent. Word around baseball is that he has been offered 5 years, $110 million from a mystery team. The right-hander has thrown 200 innings in eight consecutive seasons, an impressive feat. Some are concerned by this statistic as they worry the large total of innings will lead to a major injury.

While he is fantastic at eating up innings, Shields is only 3-6 in his postseason career and would only be a number three starter on a World Series level team like the Cardinals. $22 million per year is quite a bit for a number three pitcher with postseason concerns.

David Price — Detroit paid a high price to land Price for the 2014 stretch run. What will they want to unload him?

Price, a 29 year old 6’6″ lefty, lives in Nashville, Tennessee. He is 86-51 with a 3.21ERA in his career. The lefty is eligible for his third year of arbitration and will be a free agent at the end of the year. Many fans see value in his free agent season as pitchers work extra hard to boost their resume and make extra money in the offseason. The Cardinals would also receive a compensation pick from the team that signed him in 2016 if the Cards offer him a qualifying offer. Of course Mo could also try to re-sign him to keep him in St. Louis long term. (It’s a situation just like Heyward’s.)

Bringing in a left handed starter would really help the Cardinals as their best lefty under contract, Jaime Garcia, has done nothing but deal with injuries since signing his long term deal. Price has also been known to enjoy his time in St. Louis, even seeing games while his team was in town on an off day.

The biggest downside to Price is Detroit’s asking price (Puns not intended). The Tigers had to surrender left-hander Drew Smyly, Class-A shortstop Willy Adames and center fielder Austin Jackson to land the left-hander. Many baseball minds in St. Louis say Detroit would be asking for a Marco Gonzales/Carlos Martinez and Stephen Piscotty. It’s a high price for a guy who may only be here for one season. 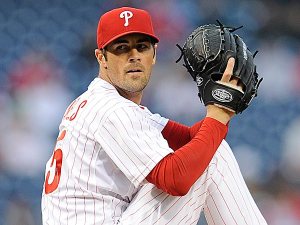 Cole Hamels — This lefty has been with the Philadelphia Phillies since he was drafted in 2002.

Hamels, a 31 year old standing in at 6’3″, is a change-up specialist who has seen lots of success in Philly. Throwing 200 innings in the last five seasons, he has a career record of 108-83 with thirteen complete games. Hamels is 7-4 in his postseason career and owns a World Series and NLCS MVP from 2008.

The veteran is under contract for four more years at $92 million. Hamels would provide the Cardinals an established lefty with valuable post season experience. He’s signed at a decent price of $23 million average per year.

As with Price, Hamels’ cost would be the highest just to bring him here. All reports indicate that Philly will be asking for quite a bit for their lefty. The cost would be similar to Price in that the Phillies would want Gonzales/Martinez; however, the Phillies may ask for Randal Grichuk, a better outfield prospect, as well as speedy Peter Bourjos. Essentially, the Cardinals would pay $23 million per year plus prospects.

Max Scherzer — Mad Max is the top pitching free agent left on the market this winter.

The St. Louis native who attended the University of Missouri-Columbia stands in at 6’3″ and is 30 years of age. Scherzer is an outstanding 91-50 in his career. In twelve postseason games, Scherzer is 4-3 with a 3.73ERA.

Hot Stove news about the former Cy Young Award winner has been quiet as his agent, Scott Boras, is notorious for waiting as long as possible to sign in an effort to make the most money. Reports circulating around baseball say Scherzer is looking for a contract in the $200 million range.

Cardinals fans have been watching Scherzer closely since his days at Mizzou, hoping one day he will be brought home to pitch in Busch Stadium wearing the Birds on the Bat. Some wonder if Scherzer could give the Cardinals a bit of a hometown discount, but that seems unlikely. While the price would be steep, Scherzer is attractive because the Cards wouldn’t have to send away any of their young talent. 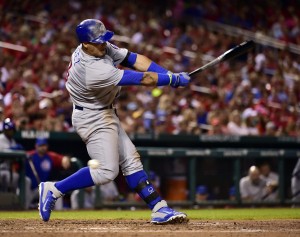 The Cardinals are well known for not buying into hype and signing massive contracts. This is especially true for pitchers who are always one pitch away from missing a year with an injury. Some say this is the Cardinals time to spend their money on a top guy like Scherzer. The addition would create an elite rotation and add to the pitching depth. It would truly give the Cardinals a chance to win another Championship before the young Cubs sluggers mature and become a threat in the division.

When you're parked on the interstate for over an hour, you post on Instagram for the first time in months!
Christmas is a time of many boxes and lots of wrapping paper, some of Rusty's favorite things. Merry Christmas from this spoiled cat 🎄
Rusty is outgrowing his favorite box.
Looks like this scarecrow has had enough of 2020, too.
Loading Comments...
Comment
×
%d bloggers like this: